On Monday 30th September the boys and girls from Room 12 walked from the school to Newbridge Train Station to welcome the musicians representing the RTÉ Big Music Train. The children really enjoyed their walk and listening to the music. The children thought that the bands were very good. A big thank you to all parents who volunteered on the day to help us on the walk. Your help was very much appreciated. 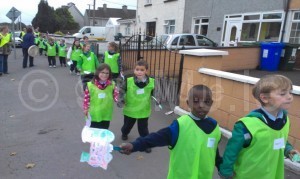 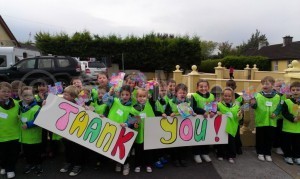 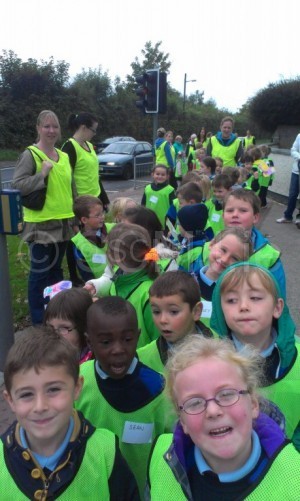 Over 2000 young people from various schools and community groups walked, sang and played instruments in a display of all that is good and creative in our town.

One very special feature of the Scoil Mhuire parade entry was the participation of parents from the Parents’ Room. Don Nea and his parent’s guitar class led the children in a medley of song and music from the train station to the P.B.S. We extend sincere thanks to the parents who played guitars or other instruments, those who sang along or those who came out to support us in any way on that wonderful day.

The concert at noon organised by RTE encompassed a selection of local and national talent. It served to remind us of what a remarkable musical heritage this town has and the day itself became a beacon for community development in ways.

We featured on many different media platforms such as Nationwide, Twitter and the RTE Music Week website. Our school also features on the youtube video below.

Thank you for joining us. We look forward to many more parent school adventures this year!

Click here to view the Safeguarding Statement and Risk Assessment.

Click here to view the Checklist for Child Safeguarding and Risk Assessment.

Click here to view the latest letter for parents from the Minister for Education.